Hotelling \(T^2\) is 2-sample multivariate analysis of variance (MANOVA) and generalization of Student's t-test in arbitary dimension [2]. The test statistic is formulated as below [1]:

Since it is a multivariate generalization of Student's t-tests, it suffers from some of the same assumptions as Student's t-tests. That is, the validity of MANOVA depends on the assumption that random variables are normally distributed within each group and each with the same covariance matrix. Distributions of input data are generally not known and cannot always be reasonably modeled as Gaussian [3] [4] and having the same covariance across groups is also generally not true of real data. 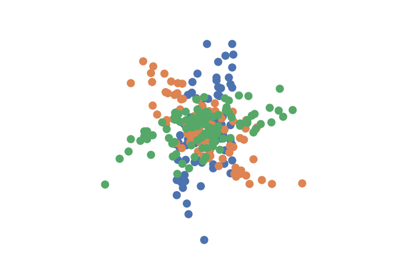