A common problem experienced in research is the k-sample testing problem. Conceptually, it can be described as follows: consider k groups of data where each group had a different treatment. We can ask, are these groups the similar to one another or statistically different? More specifically, supposing that each group has a distribution, are these distributions equivalent to one another, or is one of them different?

If you are interested in questions of this mold, this module of the package is for you! All our tests can be found in hyppo.ksample, and will be elaborated in detail below. But before that, let's look at the mathematical formulations:

Specifics about how the test statistics are calculated for each in hyppo.ksample can be found the docstring of the respective test. let's look at unique properties of some of these tests:

Neither of these test are distance based, and so do not have a compute_distance parameter and are not nonparametric, so they don't have reps nor workers. Otherwise, these test runs like any other test.

If you want use 2-sample MGC, we have added that functionality to SciPy! Please see scipy.stats.multiscale_graphcorr.

The data are points simulating a 1D linear relationship between random variables \(X\) and \(Y\). It the concatenates these two matrices, and then rotates the simulation by 60 degrees, generating the second and, in this case, the third sample. It returns realizations as numpy.ndarray. 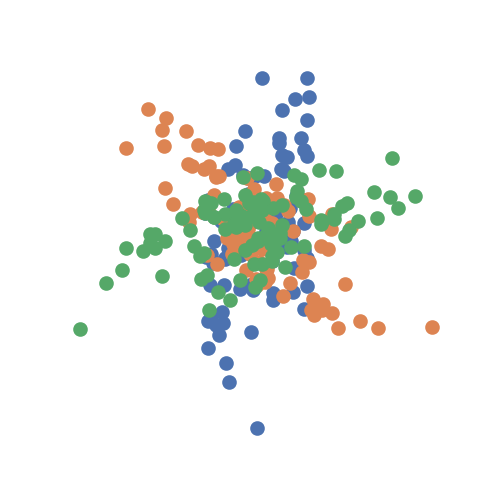 This was a general use case for the test, but there are a number of intricacies that depend on the type of independence test chosen. Those same parameters can be modified in this class. For a full list of the parameters, see the desired test in hyppo.independence and for examples on how to use it, see Independence Testing.

It turns out that a number of test statistics are multiples of one another and so, their p-values are equivalent to the above K-Sample Testing via Independence Testing. [1] goes through the distance and kernel equivalencies and [2] goes through the independence and two-sample (and by extension k-sample) equivalences in far more detail.

For MMD, kernels are used instead of distances with the compute_kernel parameter. Any addition, if the bias variant of the test statistic is required, then the bias parameter can be set to True. In general, we do not recommend doing this. Otherwise, these tests runs like any other test.