The primary motivation for creating hyppo was simply the limitations of tools that data scientists are afforded in Python, which then leads to complex workflows using other languages such as R or MATLAB. This is especially true for hypothesis testing, which is a very important part of data science.

Before we get started, here are a few of the conventions we use within hyppo:

Most classes and functions are available through the hyppo top level package, though our workflow generally involves importing specific classes or methods from our modules.

Our goal is to create a comprehensive hypothesis testing package in a simple and easy to use interface. Currently, we include the following modules: hyppo.independence, hyppo.ksample, hyppo.time_series, hyppo.discrim and hyppo.tools. The last of which does not contain any tests, but functions to generate simulated data, that we used to evalue our methods, as well as functions to calculate p-values or other important functions commmonly used between modules.

As an example, let's generate some simulated data using hyppo.tools.w_shaped:

The data are points simulating a noisy spiral relationship between random variables \(X\) and \(Y\) and returns realizations as numpy.ndarray: 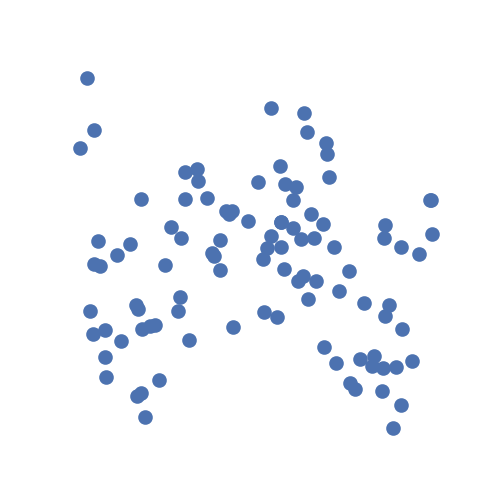 Let's ask the question: are x and y independent? From the description given above, the answer to that is obviously yes. From the simulation visualization, it's hard to tell. We can verify whether or not we can see a trend within the data by running an independence test. Let's use the test multiscale graph correlation (MGC) which, as an aside, was the test that started the creation of the package. We have to import it, and then run the test.

First, we initalize the class. Most tests have a compute_distance parameter that can use accept any metric from sklearn.metric.pairwise_distances (or sklearn.metrics.pairwise.pairwise_kernels for kernel-based methods) and additional keyword arguments for the method. The parameter can also accept a custom function, or None in the case where the inputs are already distance matrices.

Each test also has a test method that has a reps parameter that controls the replications of hyppo.tools.perm_test and the workers parameter controls the number of threads when running the parallelized code (-1 uses all available cores). We highly recommend using a number >= 1 in general since speed increases are noticeable.

Note: MGC, like some tests, have 3 outputs. In general, tests in hyppo.independence have 2 outputs.

We see that we are right! Since the p-value is less than the alpha level of 0.05, we can conclude that random variables \(X\) and \(Y\) are independent. And that's it!

This covers the basics of using most tests in hyppo. Most use cases and examples in the documentation will involve some variation of the following workflow: